When people think of Nikola Tesla, they think of his innovations in the world of electricity and his notable rivalry with Thomas Edison. What people might not know about are the small quirks which helped define his persona. Here are five unique facts about Tesla that helped make him the man he was: 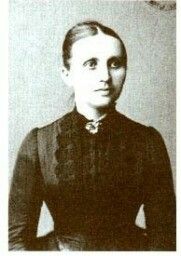 1. Tesla’s mother always encouraged his career in science; his father, on the other hand, only allowed it after a near-death experience.
Tesla’s mother, Georgina Djuka Tesla, was his biggest inspiration and responsible for sparking his love of working with electricity. When he was growing up, she would invent small electrical appliances in her spare time, including a mechanical egg beater. Tesla’s father, a talented writer and poet, was a priest and insisted his son follow in his footsteps to pursue the priesthood. It was only when Tesla was 17 and became extremely sick with cholera that his father promised his son if he survived that he could attend university and study engineering.

2. He gave all of his own money to his research and was a terrible entrepreneur; he was, at his base, an environmentalist and humanist.
One of Tesla’s larger concerns was, “the fact that people consume the Earth’s resources too fast.” Because of this, he studied different ways to gather energy from the earth naturally, including the creation of artificial light in his lab. Tesla never cared for making money through his research (as opposed to his rival, Edison). To pursue inventing he moved to the United States in 1884 with little-to-no money. When he died, he died with empty pockets and more than 275 patients in 26 different countries. His goal was to invent things to make human life better, not to make money. 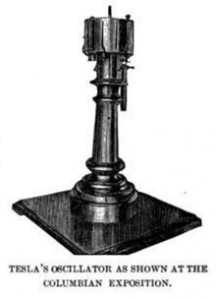 3. He created an “earthquake machine.”
The machine was actually called a high-frequency oscillator, which was a piston set underneath a platform, and caused his lab and the building which he was in to shake violently. This machine didn’t cause the neighborhood to collapse or the buildings to fall down, but reports say that it did cause close friend Mark Twain to panic and helped to solve Twain’s recurring digestive problem. This was one of the only inventions that wasn’t seized later by The Office of Alien Property. Most of the other inventions were later returned to join the high-frequency oscillator in the Tesla Museum in Belgrade. Other inventions that were returned included his attempts at creating a particle gun and a death ray. 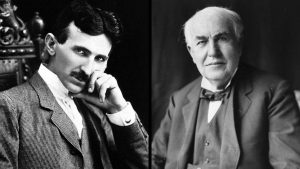 4. Tesla had some very famous friends.
Besides Twain, Tesla’s friends included French actress Sarah Bernhardt, English poet and journalist Rudyard Kipling, Wilhelm Conrad Roengen, who discovered X-rays, and financier and banker J.P. Morgan. Another poet, Robert Underwood Johnson, penned the poem “In Tesla’s Laboratory.” Also, though Edison was seen as his rival to many, the two were far from not being on speaking terms and eventually found a great respect for one another. 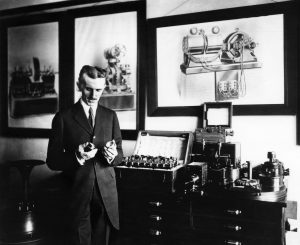 5. He was amusing and generally pretty catty.
People knew Tesla as many different things: weird, committed, highly opinionated…but everyone agreed that he had a great sense of humor. Tesla wrote to one of his close friends in 1901 to talk about how Rudyard Kipling invited him to a rundown hotel for dinner saying: “What is the matter with inkspiller Kipling? He actually dared to invite me to dine in an obscure hotel where I would be sure to get hair in cockroaches in the soup.”