Building the Pyramids of Giza

It’s hard not to compare yourself to those who inspire you. In a world where it feels like everything has been done before, it’s difficult not to look back at the some of ‘The Greats’ with idolization. But, upon closer examination, even ‘The Greats’ are more relatable than you’d think. Take the Pyramids, for example. Would you believe an architectural process created 4,500 years ago could still be relatable to every modern day inventor, builder, and manufacturer today?

First, let’s get some context on just how grand this structure is. It was the largest man-made structure for nearly 4,000 years and it stands at 479 feet tall. It’s estimated that around two million stone blocks were used to make the Great Pyramid. This is an unbelievable feat, especially given the lack of advancements at the time. How on earth did they manage it?

In every creation, there’s always a certain amount of trial-and-error. To err is human, after all. The techniques used to construct these incomprehensibly labor-intensive creations were developed over the course of centuries. And, like modern-day engineers, they experienced their fair share of setbacks.

The first pyramid was developed from the simple rectangular “mastaba” tombs that were originally used in Egypt around 5,000 years ago. According to LiveScience’s report on pyramid-building techniques, the first advancement took place during the rule of Pharaoh Djoser (2630 B.C.). The planning of the structure has been attributed to Imhotep, a vizier, who evolved the structure from its original rectangular form to a 197 foot high pyramid with six layer and tunnels underneath. 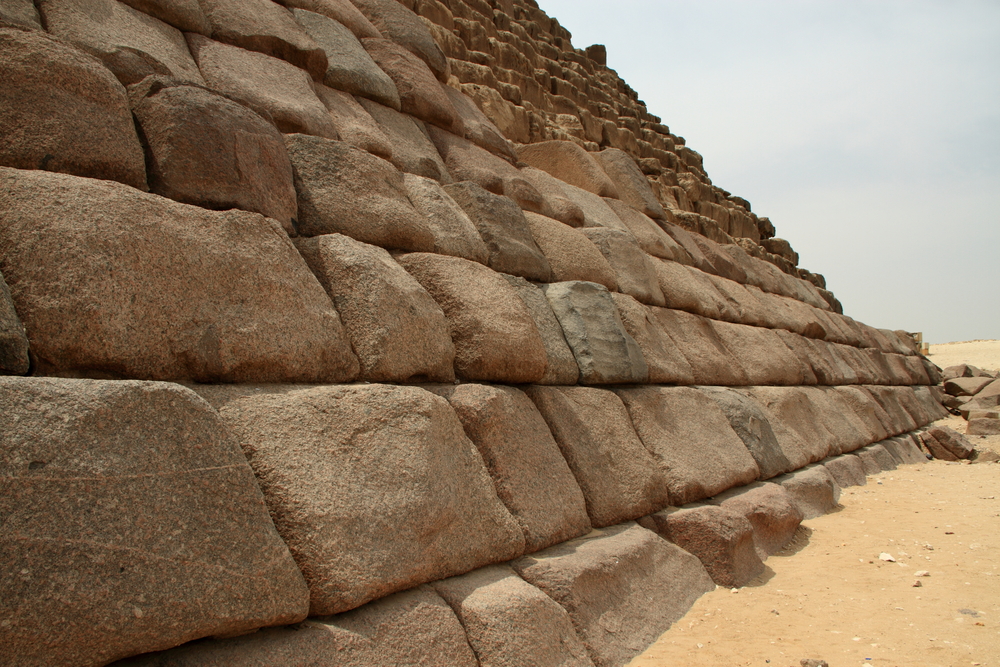 The next innovation in pyramid building came during the reign of Snefru (2575 B.C.), who was the first to create smooth-faced or “true” pyramids, as opposed to the step pyramids that were made previously.

When we think of pyramids, we think of inexplicably flawless and imposing structures, but, like all great inventors, even the Egyptians made mistakes. During Snefru’s reign he constructed a total of three pyramids, one of which is referred to today as the “Bent Pyramid” because the angle of the pyramid changes part way up, giving it the appearance of being bent.

Creation can be a process that feels like you’re failing upwards constantly. It’s comforting to know that even the great Egyptians made mistakes and they learned from them, too. Snefru corrected the design flaw in the next two pyramids he built and passed down his knowledge to his son, Khufu, who would be the one to oversee the construction of what we now know as “The Great Pyramid.”

A great architectural triumph is only as good as it’s foundation. Which, in the case of the Egyptians, comes down to the specific metals and stones they used for the construction.

The outside of the pyramids in Giza were constructed using a rough yellow limestone. Build sites were chosen based on where prehistoric oceans had deposited the most of this material. They’d dig channels and pry the blocks directly from the earth. They even determined the size of the block based on the natural thickness of the limestone layers.

This is where things got trickier because the only metal the Egyptians had access to in terms of tools was copper (which is not a particularly hard metal).

Being the innovators they were, the Egyptians learned if they used sand or powdered rock as an abrasive, their copper tools would be able to cut through the limestone.

The inner chambers of the pyramid were constructed with granite, which is one of the harder rocks out there (because it contains quartz). This was probably the most painstaking part of building, they’d chip away at the granite by hand using dolerite hammer stones.

To give you an idea of just how time consuming this was, researchers have estimated that they’d make about 5mm progress per hour. This would mean you would have to spend a full day pounding against the rock over and over, just to chip away a few centimeters. Nowadays people are barely patient enough to wait for the office printer to warm up and the Egyptians spent entire days hitting one rock against another rock.

Once finished, the pyramids were covered with a layer of white limestone. Over time, this layer has weathered and gone, but in the past it would’ve made the pyramids appear a bright white color instead of the sandy brown we see today. It’s also speculated that the very top of the pyramid may have been covered with electrum, which is a mixture of gold and silver. But, again, time ruins all things. Get it…ruins?

Sad to say for the Egyptians, but the invention of the wheel (though it happened before their time) never reached these worker bees. It probably would’ve made their lives a lot easier, but the Egyptians found other ways to move these huge tons of rock.

Let’s start with the outer rock: limestone. There are ancient drawings of Egyptians which show them moving huge monuments using sleds being pulled through sand. That may sound painstaking and inefficient, but in a recent study done by researchers at the University of Amsterdam in 2014, we discovered how they made this work more…well… humanly possible. The researchers found that sand has an interesting property where, if it’s wet with the right amount of water, it becomes slick so objects can be moved easier with fewer workers. This simple and resourceful technique cut their required pulling force by half.

If you can believe it, the granite was even trickier to transport. However, researchers have discovered records of boats that could’ve been used to float the stones down the nile when it overflowed into channels.

It’s safe to say that a person in modern day society couldn’t even begin to imagine this level of painstaking work and dedication. In fact you may even get tired for them just reading about this whole process. And we’re not even done. Once they got the supplies to the location there was the matter of actually getting the stones into place. 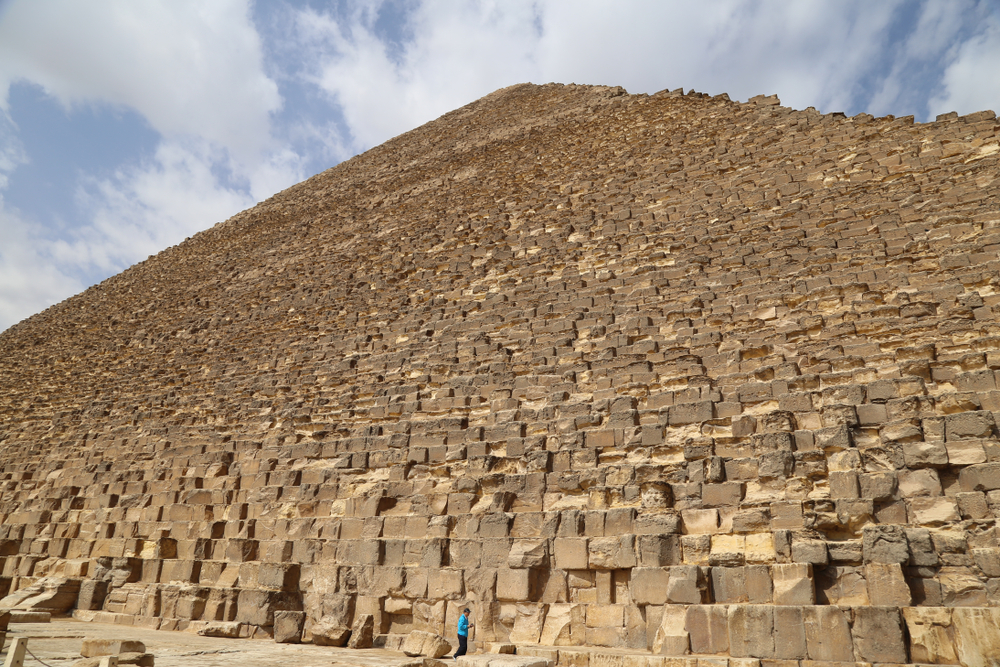 It’s widely agreed on that Egyptians used some sort of ramps to deliver the stone to its particular place on the pyramid. This may be the first and only time in your life where you’ll ever hear the phrase mysterious ramps, but these ramps are mysterious. This is actually where researchers speculate the most in terms of the pyramid constructing process as there’s no clear documentation of the ramp system used.

However, engineer Craig Smith created a detailed ramp analysis, calculating how many stones could be delivered with each design. Having done this analysis, he believes that Egyptians (most likely) extended a big wide ramp near the bottom, where most of the stones would go, and smaller spiral ramps at the top where fewer stones were needed.

Once the stones had been moved to where they were needed, wooden levers and round dolerite “ball bearings” were used to guide stones into place, where they were carved to an exact fit.

Last but not least, no project can be completed without a good workforce. According to the show It’s Okay to be Smart, to build the Great Pyramid in 23 years, “an Olympic swimming pool worth of stone needed to be added every 8 days.” For this to be possible, it’s estimated that the Great Pyramid alone required 1,200 to 1,500 workers. It’s also estimated that, between the three pyramids built in Giza, a total of 10,000 workers were likely used.

Now, anyone who has even the most basic knowledge of pyramid-building will associate the labor with an… unwilling workforce (slaves). And this was what researchers assumed for the longest time. However, in recent years, Egyptologists like Mark Lehner have uncovered massive cities built to feed, house, and care for the builders. These cities were equipped with breweries, bakeries, tool shops and even evidence that families lived nearby. A 2013 study published by Richard Retting, the chief research officer of AERA shows that enough cattle, sheep and goats were slaughtered every day to produce 4,000 pounds of meat to feed the pyramid workers.

According to Redding, “They probably got a much better diet than they got in the village.” They even received honourable burials (something a slave wouldn’t have received). Given this recent evidence, Egyptologists now speculate that, rather than slaves, these were skilled workers that were employed to build and were treated fairly well.

It’s fascinating to see how an architectural process from over 4,000 years ago can still be so relatable to modern-day building and manufacturing. Although the tools and the means are very different, they require the same basic elements- materials, transportation, workers and learning.

If you’re a creator who gets discouraged from time to time, learning about the imperfections of the Greats can make you feel a lot better about your own journey. Who knows, maybe you’ll build the next “Great” (with a capital G) thing.