Though the world is in a constant state of evolution, there are a few aspects of it that remain the same. One of those is our records for the tallest buildings in the world. Not to say that these won’t change, of course, but because an incredible amount of manpower, contracting, planning and construction work goes into building these massive structures, this probably won’t change overnight. When you’re building up instead of out, quality truly does matter over quantity. Something so tall and imposing must be as stable as possible and that requires care and foresight throughout the planning, design, and building processes. And for the construction of our top three tallest buildings, they were given just that. 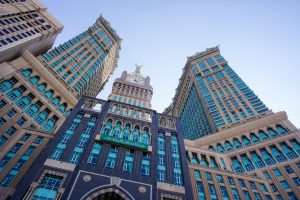 The third tallest building in the world is also commonly known as Mekkah Royal Clock Hotel Tower (or informally the Mecca Clock Tower). The location of this tower is very special as it was built only 50 meters away from Islam’s holiest site Kaaba. The central tower of the complex is 601 meters tall and has 120 floors. The crescent at the very top of the tower alone contributes 23 meters to its overall height, which is equal to a 7-story building.

It may not be the tallest building in the world, but it does hold a record for its bulk. According to The Tower Info, the Abraj Al Bait has the most floor area of any skyscraper in the world. What’s more, the base of the whole complex covers an area of 34,794 square meters. It’s comprised of 7 individual towers of varying heights. The lowest height among the towers is a whopping 230 meters tall.

It was originally built in response to the ten million tourists every year that are habituating the city. The government decided to build a large number of hotels and the Abraj Al Bait was built to increase the subordinate scope of the area.

The construction for this project began in 2002. It was contracted and developed by the Saudi Bin Laden Group- the largest construction group in Saudi Arabia. The original struggle was making room for the ambitious complex. The government had to shovel a hill and demolish a fortress that was built in the 18th century in order to make room for this looming tower. The destruction of the fortress initially sparked controversy among some as it was the remains of the Empire of Ottoman. The complex was finally completed by 2012 and cost a total of 15 billion dollars to build. 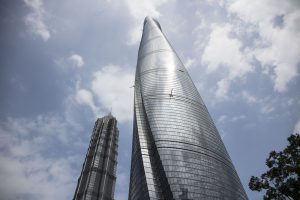 Coming in at number two on the list is the Shanghai Tower. This innovative tower came with its fair share of challenges in construction as it had to be built to combat the windy climate, an active earthquake zone, and clay-based soils.

In order to combat the harsh winds, the tower was designed to have an asymmetrical form, a tapered profile, and round corners. The form was refined after wind tunnel testing and it ultimately led to a 24% reduction in structural wind loading (as opposed to the rectangular shape) according to Designing Buildings.

This utterly unique design required more than 20,000 curtain wall panels of more than 7,000 different shapes. Typically, this would be an unrealistically complex and costly venture. However, for this project, they used computer-aided design tools with parametric software and laser measuring technology. This was able to significantly cut down on cost and make the extremely specific customization possible.

The building is supported by a strong concrete core, approximately 61,000 cubic meters of concrete to be precise. They used steel super columns to support the tower, with ‘branches’ extending out at the base of each zone. A 1,000 metric ton tuned mass damper is located near the top of the tower as well, to further counteract the sway.

The tower has also become famous for its green initiative as one-third of the site is green space. It accomplishes this through a trigeneration system and a greywater/rainwater system. Not only that, but the lighting for the tower is powered by 270 wind turbines which are built into the facade. 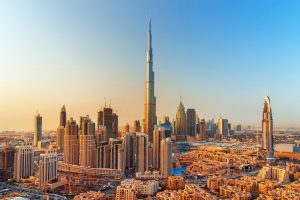 Last, but not least (literally) is the Burj Khalifa tower in Dubai. To build at 828 meters tall, you have to begin with a solid foundation. This tower’s construction is supported by a reinforced concrete mat, which is itself supported by 192 concrete piles. In an attempt to counter the effects of highly-corrosive groundwater, a high density, low permeability concrete and a cathodic protection system was used.

Concrete, as well as steel rebar, were used in the construction of the building itself. In fact, if you were to lay out the steel rebar used end to end, it would extend over a quarter of the way around the world. They developed a special concrete mix that was pumped to a height of more than 600 meters without segregating. Because the concrete was worked on for more than three hours before hardening, it ultimately cut down on construction time and made the building more sustainable.

During the exterior cladding process, they installed an aluminum and glass facade. There are close to 26,000 glass panels used on the building, each individually hand cut. According to Arabian Business, the total weight of aluminum used on the building is equivalent to five A380 aircrafts.

This was a massive undertaking and involved working with more than 60 contracting and consulting companies from all over the world. At their peak of construction, there were over 12,000 workers and contractors on site each day. Now, 22 million man-hours later, this tower still holds the record for tallest in the whole world.

Architecture is a strange constant in our otherwise rapidly changing lives of the 21st century. Regardless of whether this list changes in a few years, these structures and the work that was put into them will likely remain with us for a long time to come.