It’s safe to say that Inventionland Packaging Engineer Trevor is often “board” at work. If you’re curious to find out what we’re talking about, keep reading to learn more about his cardboard creations.

Trevor works on package design and engineering every day at Inventionland and is often “board” at work and even “board” at home… cardboard that is!

Interestingly enough, Trevor just doesn’t work with cardboard, he works ON cardboard, too. In true maker fashion, he has designed and created a slew of cardboard creations!

The roots of Trevor’s cardboard creations all stem back to the Creativity Cabin, a place that he calls “home” at work each day.

He says he often overheard Inventionland tour guide extraordinaire, Sam and Senior Producer, Tony filling in their tour groups about why the cabin and the packaging work done inside went hand-in-hand.

That simplistic breakdown sparked an idea in his mind and that’s when he decided to let his “board-om” take over. He created a cardboard front door for the Cut Hut, then a desk and also the Creativity Cabin’s porch, a lamp, pencil holder and even a chair!

“It started from the floor up and one thing after another led to its completion,” said Trevor, who admitted that working with cardboard is anything but boring.

“Once in a while, I’d put a wrong piece down, have to pull it off and start again,” said Trevor who worked on his projects with no set design plan. “You get a sense of accomplishment, especially when you ’wing it’ and you don’t know how it’s going to end up. When it ends up better, you’re just kind of like ‘SWEET!’”

Of course, he isn’t the only one to recognize just how “board” he is at work.

“Everyone really liked it! It was just fun to do,” said Trevor.

Speaking of fun, he admits that the packaging work he does at Inventionland leaves him anything but bored.

“I just like the job, so it keeps me motivated!” he said.

Trevor is so motivated by his work that he’s taken his passion for “board-om” home with him! Check out a few more of the cardboard products he has made for work and for his own home: 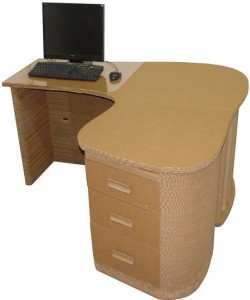 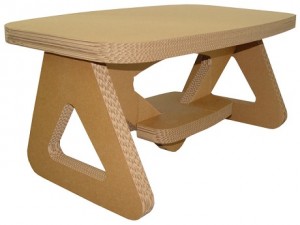 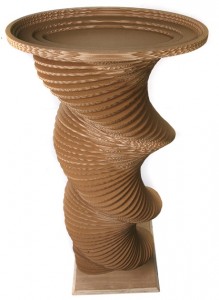 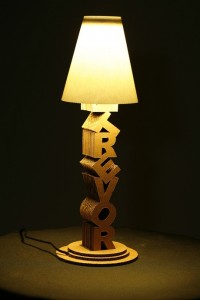 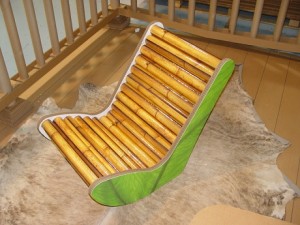 It’s creativity like this that really inspires you to take what you have around you and get crafty! What have you created lately?