Home » Blog » Manufacturing: From Past to Present

Manufacturing: From Past to Present

We don’t think a lot about where our things come from. We simply use our toothbrush or our computer or coffee mugs, rarely giving them a second thought.  Nor do most of us consider that hours and hours of work goes into every single man-made item we touch. It’s even more daunting when we think of how, prior to the development of manufacturing, items were hand-made and could take days to make. There’s a long history to manufacturing and how we’ve gone from just man-made to man-and-machine-made.

The first major shift in the manufacturing industry came during what we now refer to as the Industrial Revolution. This was a shift that occurred in the 18th century where, instead of items being produced by hand, processes were invented which allowed items to be produced by machines. It began in England in 1760, finally reaching the United States by the end of the 18th century.

The dramatic reduction of material cost and production time impacted several industries including the textile industry. Prior to this period, textiles were mainly made in people’s homes and merchants would provide the basic equipment and materials needed. This meant workers would make their own schedules, which made it difficult to regulate.

The shift from man to machine changed not only the production process, but caused a dramatic shift in the market as well. For example, prior to the Industrial Revolution, textiles were primarily hand spun and made of wool. Enter the spinning jenny, a machine which enabled an individual to produce spools of thread simultaneously. The power loom was also invented during this period, which mechanized the process of weaving cloth. The combination of these two inventions caused cotton to overtake wool in the textile field.

The iron industry also made some major developments during this period. According to the History website, an Englishman named Abraham Darby discovered a simpler and cheaper method to produce cast iron, using a coke-fueled furnace (rather than charcoal fueled, as was previously used).

In 1712, the steam engine was invented by Thomas Newcom and this began to be used to pump water out of mines. By the late 18th century, Newcom’s invention was improved upon by James Watt and it was now used to power machinery, ships and locomotives. 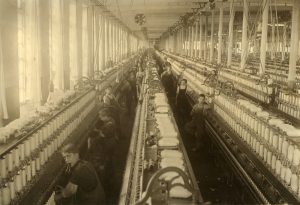 While the Industrial Revolution raised standards of living for the upper and middle class, the lower and working class still struggled. Because the demand was greater than the supply, new factories were forced to open and the hours for workers were extremely difficult. Unskilled workers were easily replaceable and children were employed and used for highly dangerous tasks like cleaning the machinery. The demand on workers during this era is what ultimately led to the 1833 Factory Act, which placed restrictions on the working hours of children and set standards to protect workers.

The next shift in manufacturing was the introduction of the assembly line. The assembly line was first patented in 1901 by Ransom E. Olds, a car manufacturer. His method allowed his company to produce 20 units per day, which eventually increased their output by 500 percent in one year. Because they were creating more vehicles, this allowed them to drastically decrease their prices. The method used by Olds ended up serving as the model form when Henry Ford created his own system.

Ford is credited as the father of the assembly line as well as of automotive mass manufacturing. He improved on Olds’s system by using moving platforms and a conveyor system. The vehicles were towed by a rope which would move them from station to station. This way, workers could just assemble the different pieces as they arrived at their stations.

The plant was producing what they called the Model T car. Prior to this shift, cars were considered a luxury item. It was fairly expensive when they first released it, initially the cheapest price was $825 (which was equivalent to about $18,000 in today’s currency). But as production efficiency increased, they were able to drop prices drastically so the vehicles were more affordable. 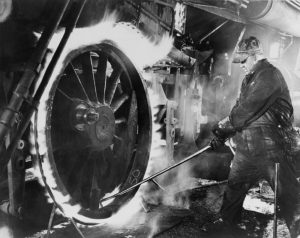 They also kept prices low by eliminating some waste and sticking to one product. They would only have to build one model allowing the engineers to develop a system of interchangeable parts from that single prototype. This drastically reduced waste and improved the ease of the process, making it more possible for an unskilled workforce. According to History’s website, ads at the time stated, “No car under $2,000 offers more, and no car over $2,000 offers more except the trimmings.”

These vehicles were not only affordable, but they were of high quality. They had 22-horsepower, four-cylinder engines and were made with a brand new heat-treated steel, which made the vehicle lighter and stronger than the competition. Between 1908 and 1927, Ford manufactured around 15 million Model T vehicles.

The next major step was the creation of the Unified Assembly Line by Buick Motor Company. The plant was opened in Flint, MI and made headlines as it was able to turn around over 1,300 cars per day. It was built and designed by C.B. Durham, who wanted to obtain the most speed and economy in the assembly operation, while still maintaining quality standards.They were able to cut costs significantly by creating a system of elaborate and intricately designed conveyors in one unified line. A steady stream of finished and tested valve-in-head engines were transported from the engine plant, through a tunnel using a chain.

In 1948, Toyota Motor Corporation developed what they called “Lean Manufacturing”. This process was developed in order to improve the flow of production by identifying and eliminating waste. This system was a drastic change from previous systems as it required more persistence and detailed observation. This system was mostly confined to Japan until the 1970’s when the United Kingdom began to adopt their own system of lean manufacturing. By the 1990’s, the concept of lean manufacturing began to spread outside of the automobile industry. It’s now used in electronics, aerospace, healthcare, construction, and food manufacturing.

Over time, Toyota has worked at improving their own version of the lean manufacturing system, which they still use today. It’s now been renamed the ‘Just in Time System’ and it emphasizes making only “what is needed, when it is needed, and in the amount needed.” Their new system also states that they specialize in: “Producing quality products efficiently through the complete elimination of waste, inconsistencies, and unreasonable requirements on the production line.” 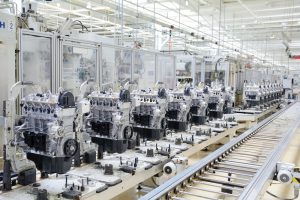 Fast forward to present-day and our manufacturing systems are primarily machine-dominated. It may surprise you, but modern-day robotic thinking began all the way back in the year 1926 with a robot called Televox. This robot was introduced by the Westinghouse Electric Corporation and the robot could respond to the human voice and perform useful tasks. What set Televox–or Mr. Televox as he was called at the time–apart from other robots at the time were that most of them were very simple robots. They were designed to simply perform crowd-pleasing tricks like smoking a cigarette, firing a revolver, or whistling a pleasing tune. Most were also made with a series of gears and levers and they’d be voiced and controlled by their inventors.

This particular robot, designed by R.J. Wensley, was the first that could be put to real use. Wensley believed that robots could be used for more than just entertainment and Televox was a first approach at this new form of industry. According to an article by The New York Times, Wensley was quoted in 1933 as saying, “In time to come the only work to be done by men and women will be that which requires faculties of discernment, discretion, and judgment. All other work – anything repetitive, routine, standardized – can better be done by machines.”

From then, we’ve made steady progress toward more robotic assembly and manufacturing lines. The 1950’s and 1960’s were huge periods of experimentation and movement towards this future. The first industrial robot was called Unimate and it began work in the General Motors Assembly Line in 1961. George Devol, the creator of the device, went on to create the world’s first robot manufacturing company.

According to Robohub,  Stanford engineer Victor Scheinman created the Stanford Arm in 1969. This was a 6-axis robot which could move and assemble parts in a continuous repeated pattern. This invention drastically expanded robotic manufacturing in ways that are still applied to the modern assembly. At Philips Electronics factory in the Netherlands, for example, production is completed by a number of robot arms assigned to specific tasks.

Today, robotics have reached a new level of innovation. Companies such as Rethink Robotics are even attempting to develop adaptive manufacturing robots which are able to work next to humans. These robots would help to improve efficiency and increase productivity while also being low-cost and user-friendly.

It’s been quite a long journey, but we’re now at a point in human history where mass manufacturing allows products to be made quicker and easier than ever before. Given how far we’ve come, who knows what the future of manufacturing will hold in its (most likely) mechanical grip.