To build or not to build, that is the question. Theater productions have the ability to enthrall audiences…to take them out of reality and transport them to a different era, to a whole new world. Now, this is largely due to the skill of the actors onstage, but the other major component is the set design. A stage production with an amazing set has the power to take an audience member completely outside of themselves and put them into the story unfolding before their eyes. Naturally, given the level of importance, it’s no easy undertaking. The requirements and construction needs vary between productions, but there are some components to set design that are relatively universal: design and construction. 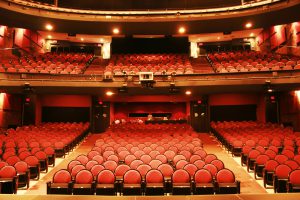 Before you can even begin to construct a theater set, a lot of behind the scenes design work must be completed. Every production is different in terms of its setting and time period, so the set needs to properly reflect the production. It’s an important job, too: the set is usually the first part of the show that an audience sees. Set designers will typically begin researching the play and its setting to get inspiration for walls, color schemes and different furniture items or props that should be present. In terms of color, Arts Alive suggests that color alone can help set the mood of the play, stating that a designer will typically use brighter colors for a comedy and darker colors for a drama.

Along those lines, it’s also suggested that set designers remember the sightlines. Different theaters have different areas of visibility and different blind spots. A designer must know the theater inside and out in order to properly design a set. Otherwise, when it comes to marking scenes, you risk part of the audience missing an important part of the play. It’s even more effective if you use the set to create strong architectural detail that draws the eye to parts of the stage where action will occur.

The designer must also keep the whole play in mind–including act and scene changes–when they’re drawing up a plan for the set. Perhaps there’s a large piece they really want to use, but the stage crew can’t move it quickly enough between scenes. Some productions elect to use bulkier sets as the backdrop for the entirety of the show, while others will change set pieces between every scene. Either way, ease of motion and how each piece will be moved in and out of set is taken into account before sets are even built. Otherwise there’s the risk of the crew spending time building a set piece that is impossible to use. 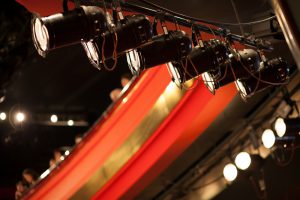 Every set has different needs. Some shows will have very minimalist sets and the actors will walk right into the audience. Other shows have elaborate sets, complete with spiral staircases or even a rotating stage. It can vary widely, but there are some consistent pieces used in most sets.

Needless to say, it’s incredibly crucial that this piece of set is properly constructed as the failure to do so will result in injury, even if no one utters the Shakespearean play which must not be named (you know which one). Again, before the building actually begins, there’s an element of preparation involved. Designers start by making sure the measurements are proper for the set’s needs. For example, are the treads (the parts you walk on) wide enough (left to right) for the performers when they’re in costume? Is the rise (step to step) reasonable for actors who will likely be singing or speaking as they’re climbing?

The stairs themselves, along with the stringer (the supporting part underneath the stairs) are constructed with plywood, while the cleat (piece of wood fastened to the stage floor) can be made of either wood or metal. This piece is used as a way of immobilizing the stair unit and keeping it from wobbling or moving across the stage.

For safety reasons it’s recommended that designers do whatever they can to increase the visibility of stair units. Paint offstage units white, use glow tape to dot the edges…anything to increase the safety for the performers. 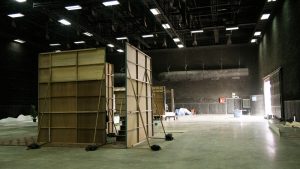 Another major set piece is referred to as a “flat”: a flat piece of scenery which is painted and positioned on stage to appear as a building or another backdrop. As with every process, this begins with measuring out the proper dimensions. Then the builders begin constructing a frame. They’ll typically start by making a cutting list of the number of pieces they need and what their measurements will be before beginning the work. That way, they can start by simply working through their cutting list.

Next, they’ll plot holes for the rails and screw together the frame, which will vary depending on the height, but will typically have a rectangular shape with one or more pieces of plywood going across the middle to keep it sturdy. Then they’ll cut out the braces, plot holes in them and screw them on. Once those are on, they’ll screw in the front of the flat which can either be made of wood or even a cloth, depending on the design needed.

Again, each set designer’s process will somewhat vary, but the final step is securing a rig in the back so the set piece stands upright. Some will use metal pieces with heavy weights while others will construct the back out of leftover plywood. Either way, the goal is both stability and mobility.

If the production needs to have multiple levels, building platforms is a must. Similar to building flats, this process begins by building the frame, the dimensions of which will vary based on the desired size. The builders will cut pieces of plywood into the appropriate sizes, using two longer pieces on the sides and three smaller pieces as the top, bottom and middle- giving the whole structure a rectangular shape. These pieces are fastened together with wood screws.

The next step is cutting up smaller pieces of wood, measured to be the same size, to be used as the legs for the platform. They’ll typically use bolts to fasten the legs to the platform for two reasons: first, bolts are better for longevity, second, they can be removed without damaging the main piece. This way, if they need to shorten the piece for storage reasons later, they can easily remove the legs and reattach them for the next performance.

Pioneer Drama suggests labeling each leg of the platform with a letter or number combination. This way, when it’s time to put the platform back together, it’s as simple as matching the legs to the proper platform corner.

The last step is attaching the plywood to the frame with smaller wooden screws and they’ll finish the construction process with a sturdy and durable set piece.

Theater set design and construction can be both an incredibly difficult and even dangerous endeavor. But if you tread carefully and don’t fall flat, any performance will rise to the occasion.