Home » Blog » This Creationeer’s Idea was a Little ‘Rusty’

This Creationeer’s Idea was a Little ‘Rusty’

Our Creationeers are always putting their creativity to use. For Inventionland Senior Design Manager, Clay, he was a little “Rusty” with his latest project.

Inventionland Senior Design Manager, Clay, recently introduced a new friend to Inventionland’s Proto Shop. This friend, an automaton dubbed “Rusty,” is a product of Clay’s own hard work and creativity as he prepared Rusty for display at Pittsburgh’s 19th annual Art All Night event on April 23rd through April 24th.

During this free, grassroots community event, artists put their art pieces on display in hopes of engaging people both young and old through interactive projects.

“I knew Art All Night was coming up,” Clay said. “I had a big pile of all the parts that I’ve pulled off of both of my vehicles over the last six months. It seemed like a match made in heaven to put those parts together and make a ‘guy’ and get rid of a bunch of other miscellaneous junk at the same time.”

You might be wondering why Clay would be pulling parts off of his vehicles in the name of Rusty. Well, these weren’t brand-new cars. In fact, they are anything but!

This “pile of parts” would make up the components of Rusty. 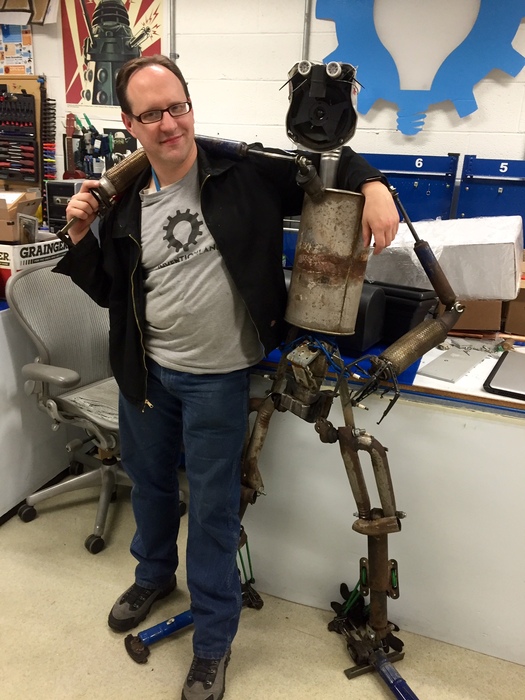 “The head is made of a reflector to a work light, while the feet are made out of caulking guns. I always hated those kinds of caulking guns. When I was trying to think of what I was going to use for feet, it seemed like a great opportunity to get rid of those,” he said. “I wanted him to be completely pose-able. I could have welded all the joints rigidly and held him in a dynamic pose, but I wanted him to be able to get into pretty much any normal human-style pose. Now, he has ankles that can move, but have enough spring action to hold his weight so he won’t fall forward.”

Clay spent time in his garage, welding away, so Rusty could be ready for Art All Night. A total of 28 hours went into building Rusty.

“The neighbors loved it,” said Clay. One of his neighbors is Creative Design Manager, Tim, who stopped by to get a glimpse of Rusty in the making.

“I had my garage doors open all night; was up grinding and welding. Fortunately, [my neighbors] were more curious than annoyed. They came out and were very interested in what I was doing. When Rusty was done, everyone was very excited. Kids love Rusty,” said Clay.

It turns out that kids aren’t the only people who love Rusty because he also received a positive reaction at the event as well!

So what’s the next stop for Rusty?

“I think that he is probably going to stake a claim in front of the Metal Shop, because the Metal Shop kind of represents Rusty’s kinship to a certain degree,” said Clay.