For the first time in Jokari’s 40-year history, the company has released the sale of a collection of gourmet consumable products. Keep reading to see what this means for our Creationeers and their prep for the Dallas Total Home & Gift Market.

Back in January, through an announcement from HomeWorld Magazine, we introduced our new working relationship with Jokari!

Since then, we’ve helped the company prepare for the International Home + Housewares Show, where they unveiled their new Paula Deen Consumables collection – a new line of gourmet baking mixes; and now we’re back on the trade show circuit as our Creationeers are busy preparing for the Total Home & Gift Market at the Dallas Market Center, starting today through June 28th.

To prepare for the event, Creationeers had to put the finishing touches on some new items that’ll accompany Jokari and Paula Deen herself at Jokari booth 180-D42 on June 24th! 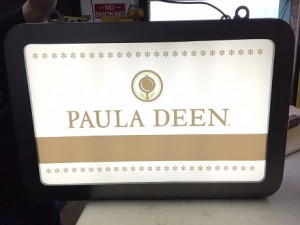 From products and packaging to displays, our Creationeers worked tirelessly to get these pieces of the puzzle ready to be shipped for the show!

When it comes to trade show preparations, this isn’t our Creationeers’ first rodeo. In fact, our team is used to the challenges that are associated with the shows. But, the stakes were a bit higher given that this was first time preparing Jokari for the gourmet sector.

According to Creative Director of Design Tim, who led a group that included Creationeers Tess, Jon, Sharon, Trevor and Lou, lots of teamwork and coordination were needed, particularly when it came to the task of creating a brand new backlit sign with insertable graphics to switch between Jokari and Paula Deen logos – all on a very tight deadline.

“My challenges are being the ring leader and orchestrating everyone to work together and keep things on task,” said Tim. “It’s nice to see everyone work together, but it’s also challenging for the team, because Jon and Sharon need [the backlit sign] at the same time Lou needs it, at the same time Tess needs it…”

This project required all hands on deck and this group of Creationeers was ready to get to work.

“Some projects that need multiple hands on it are hard to finish quickly,” said Tim. “The goal is to keep on time, on schedule and make sure the project gets handed off from one person to the next. There’s a lot of anxiety behind building something for the first time. Time is ticking and, like the other day, it’s 4:45 p.m. and we find the backlit sign is not exactly the way we want it.”

Every now and again, it takes a good night’s rest to refresh their minds and get those creative juices flowing again.

“Sometimes, you just have to go home and come back the next day having to redo what you’ve already done,” said Tim, who noted that doing so can be the only way to maintain quality and pride that goes into each and every project that comes out of Inventionland.

“We work together on these projects all the time. Having everyone together, staying positive the whole time is nice to see,” said Tim.

We couldn’t help but wonder what was going on in the minds of our Creationeers as they were completing all of the needed items for the Dallas Total Home & Gift Market. So, we asked them!

Jon, who usually takes on more of a wood-working role, put his talents to use to help create the backlit sign that’s made predominately of this material. 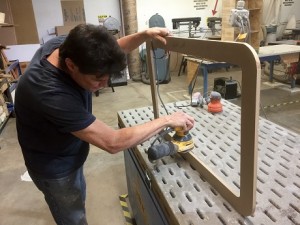 The backlit sign was the first of its kind for Jon, who admitted that it was a bit like “learning on the job,” because he had never been tasked with creating a base for a sign like this before!

“I love it, because there’s a lot of stuff that can go wrong if you don’t figure it out ahead of time,” said Jon. “There’s not a lot of time to go back and change things with a tight deadline like this. But, it’s fun; I like the challenge of stuff like this. I enjoy learning new things and the challenge that comes with that. It’s fun! I like being challenged.” 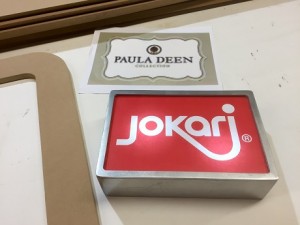 Jon, who works closely with his wife Sharon, had to make sure the base of the sign was smooth and ready to paint. But for Jon, the biggest part was getting the measurements just right.

“I have to make sure I do this right, because if I don’t, I don’t know if I’m going to be able to go back,” said Jon, referencing the way each Creationeer’s part must fit with another’s, similar to a puzzle, and having to give each team member time to work on their part. Talk about nerve wracking!

Jon wasn’t the only Creationeer who had to put their expertise to good use for Jokari’s backlit sign.

“Lou has a big challenge. He has to figure out what kind of lighting will work with limited space… Tess will decide what paint color works best,” said Jon.

Lou said that his biggest concern was completing the job on time.

“It’s time consuming running the wires; I have to make sure they stay in place… [I was most concerned about] getting it done in time and making sure it works! Time doesn’t allow room for error,” said Lou.

Even with strict time constraints, it is obvious that all Creationeers who worked on the Jokari items that are heading to the Dallas Total Home & Gift Market feel a certain affinity toward their work.

All jokes aside, Tim noted that the backlit sign was sure to stand out at the trade show and he couldn’t be more proud of his team for working hard on the task.

“Every time I stopped at Jon’s desk, he had it where I thought he would. He really kept the job moving forward…,” said Tim.

A big congratulations and a job well done goes out to Tim, Tess, Jon, Sharon, Trevor and Lou. Thanks to their teamwork and effort, they turned a brand new assignment into a hopeful trade show success!

If you’re curious to see how Jokari’s backlit sign fares at the Dallas Total Home & Gift Market show, check back next week for a final look at all of the trade show deliverables!