There’s photographic evidence of an Inventionland-designed cooking product so versatile, it can create many recipes. Keep reading for a taste of what we mean!

Our talented Creationeers work on many unique Inventionland-designed product ideas. Whether it’s due to their hunger for creativity or hunger, in general, the team seems to have a knack for developing innovative cooking and bakeware products.

Two Creationeers – Designer and food stylist Kyp, along with Photographer Michael, also known as “Spicy” – showcase these products in their best light as they capture photographs to be used for packaging design. 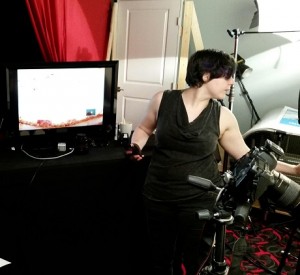 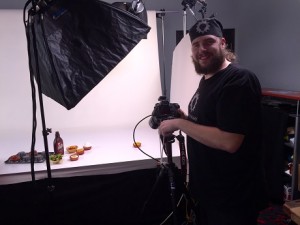 Recently, Spicy and Kyp struck again as they assumed their respective positions behind the camera to orchestrate a savory food photo shoot for a brand new Chef Tony-licensed product for our friends over at Love Cooking Company! 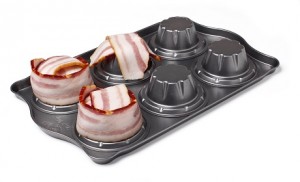 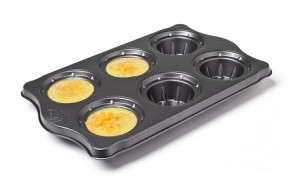 Kyp rolled up her sleeves and got to work styling the food. Kyp put on both her Director of Photography and chef hats to prep for the Chef Tony Bacon Bowl Pan photo shoot.

This Chef Tony product was designed to be versatile, so both Spicy and Kyp were tasked with the job of showcasing a glimpse of the recipe options that can be made with the Bacon Bowl Pan.

It’s a few tricks of the trade and food styling savvy that made for a successful shoot.  We’ll fill you in on a little secret; see that delicious scoop of ice cream below? Well, we have to admit, that’s not ice cream! 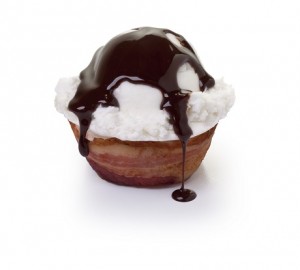 “This is my first fake ice cream shoot!” said Kyp, who used various ingredients including Crisco to create an ice cream look-a-like.

Why whip up a concoction to look like ice cream rather than use the real deal? Well, there’s a method to Kyp’s madness.

Real ice cream would have created an immediate problem, as it would melt quickly during the shoot. With professional lighting used to capture the perfect image, the heat that’s generated from those lamps would have made a milkshake in minutes!

Needless to say, Kyp was a little anxious to see how her Crisco-creation would photograph.

“That ice cream looks so good! I’m very happy with that,” Kyp said after she saw the photo.

Now, her next quest was to find a way to make her “ice cream” creation stand out against a white backdrop. The answer – Hershey’s chocolate syrup!

As we have mentioned in a previous post, product packaging and food photography is all about telling the story of the product. Thanks to Kyp’s thinking, planning and preparation, it was easy for Spicy to capture the essence and versatility of the Bacon Bowl Pan for packaging purposes! 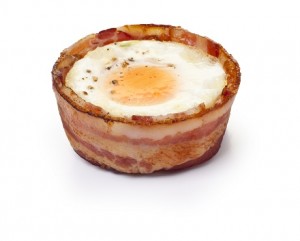 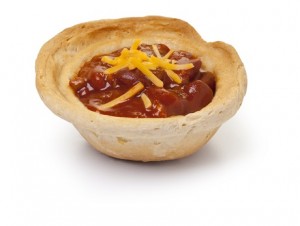